With increasing population, there is an immediate need for more space, as the sizes of houses are getting smaller and more expensive. If you happen to stay in a metropolitan city then you would be able to appreciate space-saving furniture. Townhouses as compared to houses in the countryside are smaller and more compact. Gone are those days when it was common to enjoy huge open spaces, with bulky and vintage furniture. Now with changing times, interior decoration has come a long way, and it is now that sleek and compact is more in fashion than bulky and immense furniture. Not only do they add special character to the decor but some also serve a dual purpose.

If you happen to focus on a typical bedroom, then you would realize that most of the space in the bedroom is occupied by the beds and there is very little space left for other furniture to lie down. Imagine if you could do away with the bed when it is not in use, there would automatically be a lot of space left. In such a scenario a bedroom can be used as some other room such as a playroom for kids, a study room for teenagers, or an office for a working professional during day time.

It’s very easy said and done, but very difficult to actually move the bed and pack it safely away every single day when not in use. If you are thinking of how this can be possible then there are various ways by which this is possible.

What is a hideaway bed?

A hideaway bed refers to a bed fixed or attached to something which can be folded and packed into a cabinet, a closet attached to a wall. Yes, it’s a state of the art kind of product as it is so neatly enclosed into a cabinet which does not even give a slightest of the clue of it handling a full-size bed. The mattresses come with special elastic bands which helps it in fastening to the bed frame. It has a special folding mechanism which maintains the upright position even when it is collapsed and remains in a flat position without disturbing its shape. With the improvement in technology, hideaway beds have come a long way since it was first introduced when the spring had to be adjusted from time to time in order to keep it safe and perform its functions. Now with more advanced technology remote-operated beds have been introduced which are backed with an electronic mechanism that does not require any manual adjustments.

Apparently, beds are supposed to be the bulkiest piece of furniture and which occupies the maximum amount of space. Indeed there are other pieces of bulky furniture found in your home as well such as a sofa, dining table. But, these are used throughout the day. Beds are something which is generally only used for sleeping at night time. Therefore if you are looking to find some space during day time then it's best to target the bedroom. After having a look at all the various kinds of beds which aim at either providing two or more functions or beds which aim at saving space, the clear winner among all of them seems to be a hidden bed such as a murphy bed. They are available in various sizes such as a twin bed, a queen-size bed, or even a king-size bed.

They are not only being used in houses but are also commonly used in resident halls in order to save space and provide a dual purpose for the student that is to use the study table at day and use the bed at night time.

Hidden beds or Disappearing Desk Bed have given a new definition to resident halls or college dorm rooms which are generally always running out of space. The hideaway beds effortlessly fit against the wall, as the desk automatically glides under the bed hiding it during night time. Many residence halls in the United States of America are making use of hidden beds as they aim at doubling the space when one of them namely a desk and a bed is not in use. The hidden bed covers both the aspects of furniture that are most used by a student, which is the bed and the study.

How does it operate? 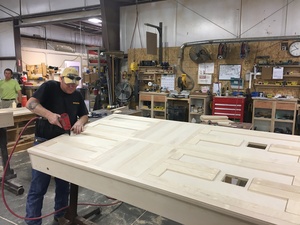 The hidden bed has a very easy to operate mechanism, which is globally patented. The best part about the hidden bed mechanism is that once the bed is pulled out the desk automatically gets adjusted to the same angle as the bed, without letting the things on the desk fall off. Therefore you do not really have to clear the clutter on the desk each time you decide to use the bed function. If you are wondering what you would not be able to place anything on the desk such as the alarm clock or your laptop, then this has been taken care of as well. The 18-inch gap is provided between the bed and the desk which provides ample space for your storage. The bed is designed to allow plugged-in devices to continue sitting on the desk even when the bed is pulled down at night. With so many advantages hideaway bed comes in various styles and sizes such as the Twin bed, full bed, and queen size. Many vendors also custom make hideaway beds for children’s rooms, nurseries, and playgroups. As mentioned above, hidden beds are being widely used in hostels and resident halls for students as they are compact and provide plenty of room for a desk and a chair when a bed is not being used.

Another type of hideaway bed is the Wall beds and pull down beds.

Wall beds and pull down beds are available in twin size, full size, queen size, and king size. They serve the same function as a hidden bed, which is to save space. However most of the wall beds do not serve a dual function, they can be pulled out when the need arises, such as a guest bed or a visitor's bed and can be folded back once the guest has left. There are vendors who custom-built the bed according to the client's needs and requirements. Some beds also come with matching wardrobes and chest of drawers which acts as a complete unit when the bed is pulled out.

The wall beds can either be manually operated, as in pulling out the bed against the wall when in need or can be electronically operated with the help of remote control. In the case of a bulky double bed, they generally come with an electronic mechanism, as pulling the entire unit is very cumbersome, however, the sleeker beds do well with a manual pull out mechanism. While buying a pull out bed one should very careful in examining the pull-down mechanism and must avoid the cheap pull out mechanism. If the pull out mechanism is damaged, then it would be very difficult to put the bed against the wall.

How to install a hideaway bed yourself?

Most of the vendors offer free installation service for a hideaway bed, however, if you still want to do it yourself or if your vendor does not provide you with a complimentary assembly kit then you can refer to the hideaway bed plans which generally come along with the product and can also be found online. These manuals would help you with what all tools and materials are required to install a hideaway bed. They might differ from variations of hideaway bed such as the basic hideaway bed to the ones which come with cabinets, desks, and bookshelves. If you are good at DIY and have some spare time, then you can try it yourself and save a lot of money, while others can hire a handyman or a contractor who can provide you with a helping hand.

In order to build a hideaway bed, one needs a variety of tools and equipment’s which comprise of a stepladder, electric drill, stud finder, screwdriver, and wrenches. These can be bought separately or can be found in a toolbox. If you are hiring a contractor then he will already have the tools required.

What all would you find in a Hideaway bed Assembly Kits?

In order to build a hideaway bed effectively, it is wise to follow step by step instructions which are given in the manual. If you are experienced in handling furniture and have done some assembly work before then you would be able to understand it without any difficulty. Some manuals also come with an assembly CD which shows exactly how to assemble the unit. There are clear and precise diagrams with measurements and directions on the manual. The manual will also illustrate which all hardware is used such as the pivots, hydraulic lifts, and rods. When it comes to folding mechanisms, it may require some assistance and you can gather some guidance for online resources. It’s always better to read the manual thoroughly before starting the assembly work as one small mistake can make things difficult and end up doubling your work. Since it’s a bulky item, therefore, try your hands on it only if you are 100% confident that you would be able to handle it otherwise seek external help.